The Way of Saint James

Sanctuary of Our Lady of Sorrows

The Greek Catholic Church of Transfiguration of Our Lord

The Way of Saint James (Camino de Santiago) is a pilgrim route that has existed for almost 1200 years and which runs through entire Europe. It is a link between various nationalities, cultures and religions and has many branches in almost every European country. To this day in Poland have been marked 22 sections of The Way of St. James with a total length of almost 5000 km. From the Podkarpackie region it is over three and a half months of hiking and over one month of cycling.

The creation of the Podkarpackie Way of Saint James Via Regia was influenced by historical conditions as the route refers to the historical trade route leading from Kiev to Santiago de Compostela. Established in the 13th century under the name of Via Regia (King’s Road), it was primarily a trade trail.

The Podkarpackie Way of St. James Via Regia is an over 200 km long route starting from Medyka through Przemyśl, Jarosław, Przerworsk, Łańcut, Rzeszów, Ropczyce to Pilzno where it meets with western sections that run to Zgorzelec then through Germany and France to Spain.

The Way of St. James Via Regia in the Podkarpackie Voivodeship:

Sites in Jarosław related to the route:

– The Way of St. James Via Regia Information Point is located in the building of the library of the Państwowa Wyższa Szkoła Techniczno-Ekonomiczna in Jarosław, contact: Jacek Marian Hołub, tel. 502338847;

icon of the Lord’s Transfiguration in the iconostasis,

stained glass window of the Transfiguration of Lord in the presbytery

– The Sanctuary of Our Lady of Sorrows – polychrome on a pillar in the main aisle (St. James the Apostle the Elder pilgrim with raised leg and the allegory of pilgrimage on an arcade in the northern aisle);

– the Dominican Monastery – monastery corridor (polychrome by Jakub Sobieski of a pilgrim in Santiago de Compostela);

– information board and signpost in the car park outside the Dominican church and monastery Dominikańska Street; 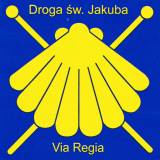 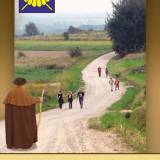 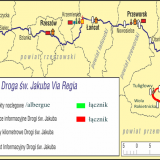 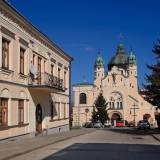 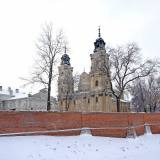 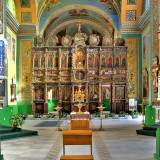 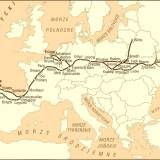 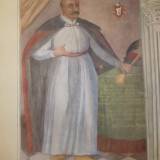 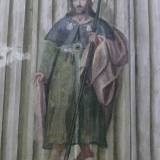