The Gate of Mercy Icon

The Greek Catholic Church of Transfiguration of Our Lord

The first Orthodox church – history and its future

The tenement of Stanyslav Lyudkevych – the Ukrainian composer

Jarosław since its inception functioned at the meeting point of two cultures: Polish, developing under the influence of the Roman Catholic religion, and the Eastern, belonging to the area of ​​influence of the Orthodox Church, and then also the Greek Catholics. The Eastern culture trail shows the most important places associated with living in Jarosław followers of the Greek Catholic and Orthodox religion. On the route there are very important sacral and secular buildings. They prove the rich and interesting history of Jarosław, as the castle-town founded by Prince Yaroslav the Wise of Kiev and the inhabitants of Ruthenia who came with him.

While walking the Jarosław Eastern culture trail, we will get to know the history of the foundation of the castle-town of Jarosław, find out where the first Orthodox temple was built, and in which part of Jarosław the district, the so-called Przedmieście Ruskie (in English ‘Ruthenian Suburb’), inhabited by Ruthenians was located. We will see the presbytery of the oldest preserved Greek Catholic church which is now located in Czesława Romana Puzon pseudonym ‘Baśka’ park where formerly a Ruthenian cemetery was located. We will find out where the house of a well-known composer, Stanyslav Lyudkevych and the school dormitory for the Greek Catholic youth were located. We will learn about the history of the construction of the Concathedral Church of the Transfiguration of Our Lord and of the miraculous icon the ‘Gate of Mercy’ and the extremely valuable 17th-century iconostasis which are in the temple. At the very end we will delve into the post-war, very dramatic fate of Jarosław Greek Catholics, related to the period of displacement and the abolition of the Greek Catholic church in the former communist bloc countries. 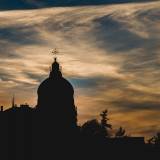