About the Merchant Route

Old Tenement Building of the Gruszewiczes

Old Tenement Building of the Attavantis

Old Tenement Building of the Orsettis

The Krakow Gate and town walls

Facilities comprising the Merchant Route are concentrated within the Old Town – especially the Market Square. It is predominantly here where trade focused as the Market Square consisted a marketplace.

Wandering the discussed route, you may get familiar with the history and architecture of the oldest and most valuable Jarosław tenement buildings owned by: the Attavantis, the Orsettis, the Gruszewiczes or Rydzikowa Tenement Building. Visiting these beautiful buildings you can get to know the type referred to as Jarosław old tenement building, which cannot be met outside the town in Poland.

Tenements of this type were customised to commercial needs and modelled on Orient-typical houses called funduq. They are characterised by the shed (a kind of internal courtyard), lit by windows or skylights derived above the roof of their vertical extension. Cellars, the so-called merchant warehouses, often multi-storey, under all buildings in the Old Town [in Polish ‘Stare Miasto’] were also useful for commercial purposes. They were hollowed in loess the layer of which below the surface of the market square is around 30 m. They were used for storing goods imported for the Jarosław fairs.

In addition, a Neo-Renaissance building of the Market Hall is located on the merchant route. It was one of the merchant marketplaces on Polish soil.

Strolling along Grodzka Street we come across the relics of the Krakow Gate which was used by merchants arriving from the direction of Krakow to Jarosław fairs.

The merchant route allows familiarising with facilities which are a precious relic of its trade power. 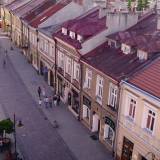