The Barracks of Franz Joseph I

The Barracks of National Defence No 34

In its long history, Jarosław was also famous as a very important military town, constituting the bridgehead of the Przemyśl Fortress. It was here that the fourth largest military garrison in Galicia was stationed. It is also worth remembering that it was in Jarosław that the number of troops was higher than the percentage of civilians, which made it different from other towns of this size throughout Galicia. Walking along the so-called barracks trail we can reach the former military buildings (including barracks, warehouses, exercise yards, shooting ranges) erected in the nineteenth and early twentieth century. We will also visit historic churches and monasteries which were abolished as a result of the dissolutions under Joseph II (led at the end of the 18th century). In the past, these places were vibrant, and the presence of so many military crews gave the town its specific atmosphere and character as Mieczysław Orłowicz, the famous tourist nestor, wrote in his memoirs. Some of the barracks complexes have been destroyed and demolished or reconstructed and adapted to perform new functions – for example, they are currently the seat of public institutions (e.g. a health care institution or a school and education centre). Some of them still serve the needs of the Polish Army. 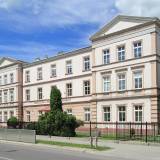